Ladies of the Week #2: Broadcast

Broadcast were a lady-fronted band from Birmingham, whose sound is absolutely up my street: ghostly vocals over fuzzy guitars and songtitles which mention cats.

I don't really know much about them, other than that singer Trish Keenan died last year of pneumonia, which is incredibly sad as the sound and content of her vocals is both intriguing and beautiful.
All you need to know is that the 2005 album 'Tender Buttons' is a perfect lazy Sunday afternoon soundtrack, full of hazy and whimsical electro-pop ditties that back seemingly stream-of-consciousness vocals. It's hard to talk about the songs individually as this is a perfect example of an album that should be listened to as a whole. So, here's one of the shorter songs, 'Tears in the Typing Pool'.
PS. Be careful because there's some awful sappy big-haired 80's-looking band called Broadcast too, and they are absolutely NOT GOOD.
Posted by redspectacles at 2:33 pm No comments:

Ladies of the Week #1: Electrelane

I am by no means a staunch feminist, but it was brought to my attention some days ago that I listen to a LOT of female singers. I hadn't really noticed but it is entirely true, at least at the moment, and so I am going to start writing every week about some totally rad ladies, partly because it'll soothe my writing itch and partly because this blog has been largely neglected since pretty much about 2 months after I started it. So... Electrelane are an all-lady band from Brighton, who I first heard when I was about 19 when one of the boys in my university halls was listening to No Shouts, No Calls (2007) in his room. There are albums and there are albums, if you know what I mean, and this is one of the latter. From the quiet-tinkle-into-organ-burst of The Greater Times to the mad head-bopping cascade of The Lighthouse, this is a wonderful wonderful piece of work.
I'm not quite as familiar with the other albums, mainly because they were never the latter 'album' for me, so I'll  just mention some stand-out songs from the other releases (minus Axes which I have yet to listen to properly).
One such of these songs is Film Music, from Rock It To The Moon (2001) which has something of a James Bond swag to it and is perfect for daydreaming to, i.e. imagining yourself as the protagonist in a 70's spy flick as you make your way to work. Yeah, it's awesome - listen to it here.
The next song is altogether entirely different from anything else of their's. The Valleys from The Power Out (2004) always makes me think of Wales (yes, the country) and the Sound of Music and it is both wonderfully bizarre and absolutely awesome. About 3:45mins in it goes incredibly epic and choral and it's breathtaking - listen here.
I think the main appeal of Electrelane for me is their diversity. I don't think that one album sounds the same and it is a risky business to change your sound so, because the fans might hate it. On the other hand it's incredibly dull when an artist sounds the same the whole time, and even if I weren't to enjoy a new release from them I would still hold them in high esteem because they had the balls and the imagination to create something entirely different from previous work. And in any case, I don't think they've missed the mark yet so Electrelane, I salute you.
Posted by redspectacles at 5:47 pm No comments:

Anyone who makes sculptures out of bananas is a dude in my eyes. He eats them too. I'm sure I could go on some pretentious drivel about edible art that only exists for about 30 minutes but really, the guy carves bananas. Ace.

(the site I stole this from and also more demonstrations of his carvings)
Posted by redspectacles at 11:17 pm No comments:

"Tonight, I'm gonna melt some faces with gattling-gun social skills".
Flippin' wonderful in a scruffy, slightly unnerving, back-water rock'n'roll kinda way. And the lyrics are pretty rad too.
LISTEN ON YOUTUBE
(Just read something on the Guardian comparing them to Fleet Foxes. Well I can't say I've listened to much of their other stuff so I can't comment really, but going on this that is absolute balls: THIS IS WAY BETTER!)
Posted by redspectacles at 8:37 pm No comments: 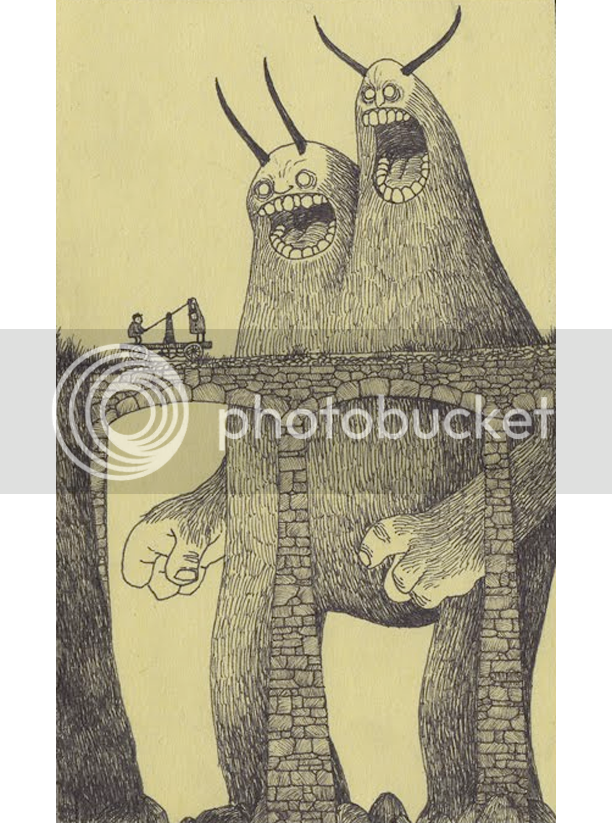 Don Kenn, aka John Kenn Mortenson, from Denmark, was brought to my attention by a lovely friend some months ago, and I was reminded of him upon seeing a guy wearing a t-shirt with a design that had some similarities to his style last week (though by no means as good). His creepy drawings are all done on post-it notes and are the stuff of nightmares, in an absolutely wonderful way. I wish I lived in a world where monsters were real and the landscapes were all decrepit buildings and lakes and bare trees! Sigh. Here's a link to his blog.

Posted by redspectacles at 5:49 pm No comments:

Entirely hypnotic from the very first note, it makes me feel as though I'm lying in long grass in the late afternoon of a hot day. It's very rare I enjoy anything quite so much as this: lazy riffs, daydreamy vocals, strings et al. If music were food, this would be absolutely delicious.
LISTEN ON YOUTUBE
Posted by redspectacles at 3:55 pm No comments: I think I love her. Her collection of paintings of cats in clothes, all of which are depicted in outfits reflecting their personalities, is totally awesome. And, if you have a spare $500, you can have your own cat painted too (if I could afford it, I definitely would). This cat is Morris, by the way.

Heather Mattoon's web & more cats in clothes
(It probably says rather a lot about me that I have just spent the last 2 hours in Madrid's Museo del Prado, and although there was some very impressive stuff there, nothing got me nearly as excited as these did)
Posted by redspectacles at 8:33 pm No comments:

I just think these are wonderful. And hilarious.

'Eisbär' (polar bear) is short-lived Swiss band Grauzone's 1981 single. Apart from the dubious sax burst at the end, every part of this song is Bang On.
http://www.youtube.com/watch?v=cTuTc_liKS4 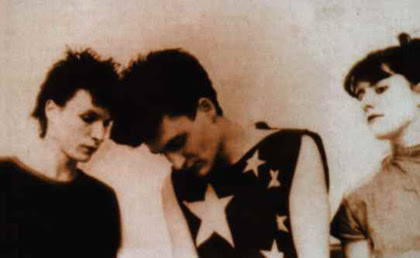 Posted by redspectacles at 2:30 pm No comments:

It's almost a shame that tobacco advertising is banned. 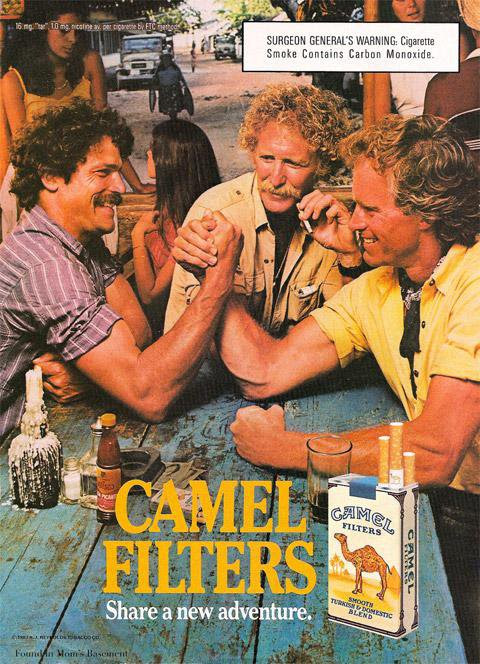